The changing face of our first home

The Great Australian Dream of the 1960s – when the grandparents of today’s first home buyers were buying their first homes – was generally a modest two- or three-bedroom house on a large block of land. Houses were mostly weatherboard, with fibro cement still being used to build about one in 10 properties. Project builders had just entered the marketplace with the standard brick-veneer home that was to become the popular choice for decades to come.

It was generally accepted in those days that young people lived with their parents until they married and bought their own place, which would then become their family home. The husband went to work while the wife stayed home and looked after the house and kids, who usually had to share a bedroom.

Many homes in the ’60s still had outside laundries and toilets, and cooking was done on a fuel-burning stove that also provided heating and hot water.

By the mid-1980s, the whole dynamic was different. The Dream was less about shelter and stability and more about investment opportunity and status.

Many wives worked, which meant first home buyers could afford more. And as the house was a status symbol, the bigger you could afford, the better. In fact, between 1986 and 1999, the average size of new dwellings increased by almost 30 per cent, and almost a quarter had four or more bedrooms.

This was the era of the McMansion: the huge double-brick or cement structure that took up as much of its block as possible. They didn’t just have a living room – they needed a formal sitting room, a rumpus room and a study/home office. There was at least one bedroom for each family member (some with an ensuite) as well as a double garage.

Statistics show that in 1994, almost two-thirds of first home buyer households had three bedrooms, while 13 per cent had four or more. A quarter had more than one bathroom, and the most commonly used fuels for heating water were electricity and mains gas.

Today: First rung on the ladder

One of the biggest differences between first home buyers of 2015 and previous generations is that they’re now not necessarily looking to buy their ‘forever home’. They work full-time, may or may not be married and, if they can’t afford to buy where they want to live, will buy an investment property first. They might even choose to buy with friends or family. 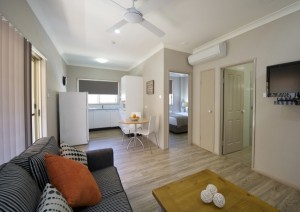 Perhaps they want to stop renting, so a two-bedroom apartment is sufficient to start. They’ll move into a larger house with a yard when the kids are older.

Economic circumstances feature, as apartments are invariably less expensive to buy, but lifestyle choices also play a role. Buying a house usually means looking in outer suburbia, which entails commuting and the likelihood of living away from friends and family.

These days, first home buyers have worked out how to live larger in small spaces. They generally have no need for the yard, pool and spa, though they do look for an area where they can entertain and perhaps work from home. Leisure amenities, technology and eco-friendly features are also important.

The times have changed and so have the needs of first home buyers in Australia. With the median house price looking to continue rising, the look of the first home might continue to change as well.