Why now is a great time to be a renter

While Prime Minister Malcolm Turnbull insists there’s never been a more exciting time to be an Australian, new figures show now is actually a great time to be a renter.

The increased rate of supply means rental prices have dropped by -0.6% over the twelve months to July 2016.

In July, rental prices fell in capital cities apart from Melbourne and Hobart, according to the latest CoreLogic RP Data Rent Review Index.

The figures show that for some looking to buy that first home, renting could be a better short-term option, says REA Group Chief Economist Nerida Conisbee.

“While renting is not for everyone, for those that are looking to buy, it is now a good value option given the lower capital growth expected for Australian housing over the next 12 months,” she says.

The capital cities which experienced the biggest declines in rent prices are also those that are struggling economically, says Conisbee.

“The markets experiencing the biggest drops over the past 12 months have been in the lower growth economies of Perth, Brisbane and Adelaide. Although Melbourne and Sydney continued to see growth over this 12 month time period, the rate of growth continues to moderate,” she says.

Renters are paying on average $483 a week which is the lowest combined capital city median weekly rate since December 2015.

With low wage growth and an increase in the supply of rental properties, landlords are unlikely to increase prices, which is good news for the growing number of renters, according to CoreLogic RP Data Research Analyst Cameron Kusher.

“It is anticipated that the rental market weakness will persist and that on an annual basis rents will continue to fall over the coming months,” he says.

Renters set to be in majority

The data on rental prices comes amid predictions that the number of Australians living in units or apartments is set to steadily rise. 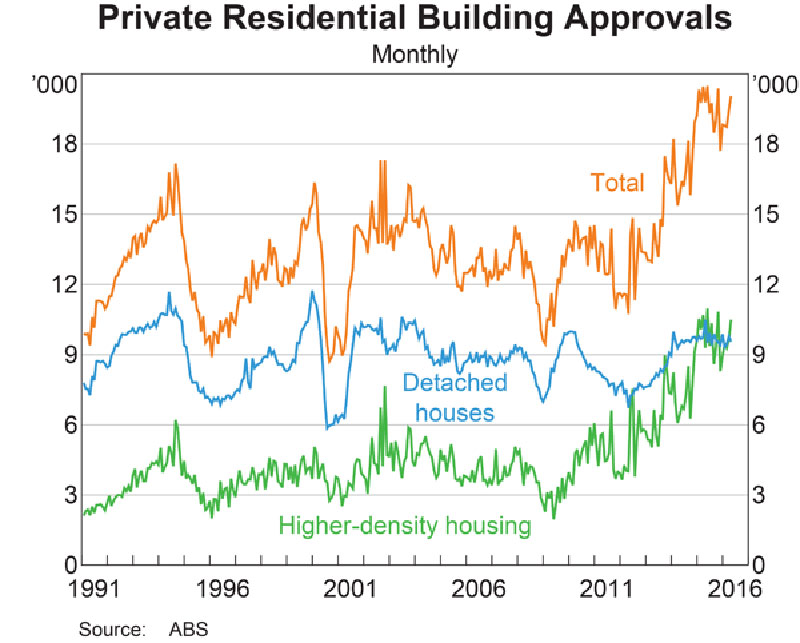 Fluctuations in building approvals since 1991. Picture: Reserve Bank of Australia

At the last census in 2011, those living in apartments made up 13.6% of the population and it is predicted that number will rise dramatically when the results of the 2016 Census are published.

“This  is partly due to the large number of rental houses that have entered the market, as well as declining affordability for many potential home buyers,” says Conisbee.

At the same time, monthly approval rates for high-density buildings have been steadily rising with investors, particularly those based overseas, pouring their wealth into new apartment buildings creating increased supply for renters.

The recently released Household, Income and Labour Dynamics in Australia Report also shows that within the next few years, home ownership rates are tipped to fall below 50% of the population

For those investing in rental property, yields have fallen which will force many to focus on capital growth.

“The strong investment market has made it more difficult for many buyers to enter the market or to upgrade,” says Conisbee.

“Conversely, renting has become a lot cheaper in many markets as the supply of rental housing has increased significantly.”

8 steps to getting started in property investment